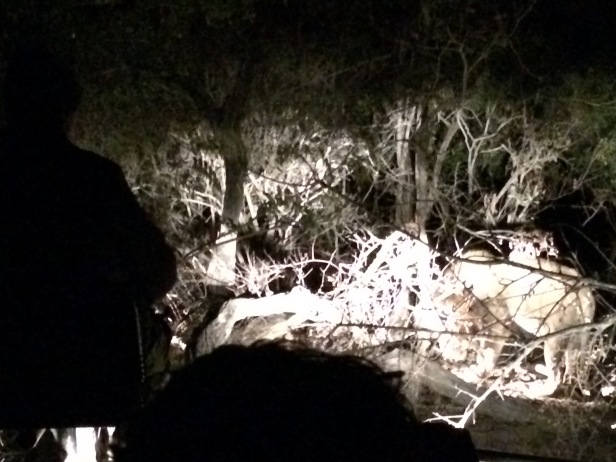 To be completely correct about where we are, it is in the Sabi Sands private reserve. This is adjacent to the park and the borders are open.

On our evening game drive we saw a large rhino and her young one right in the road in front of us. We saw a Giraffe and lots of Water Buck, Kudu, Springbok, Wart Hog, Jackal, Zebra, Mongoose, and Impala.

More exciting was seeing the “big five” in one day. We saw Cape Buffalo, Hippo, Rhino, Lion and Leopard.

The one hippo was a very sad thing to see, as he was dieing and nearly gone. He was filly prone in the bush right beside the bush road. He possibly died of starvation or thirst from the terrible drought here.

The lion siting was incredible. It was late this evening and fully dark  thus the one poor picture. We however could see them clearly from a very close location, just a few feet away. The pride was feeding on a just killed Cape Buffalo. There were four females and a huge male lion. We watched for a long time.

On the way back we saw a large leapord moving through the bush and we could see it clearly.